Although we much prefer to be out in the open air, either sniffing around in the forest or enjoying the countryside, we have been known from time to time to get spruced up and have been seen at some of the top dog shows.

Meet some of our stars of the past: 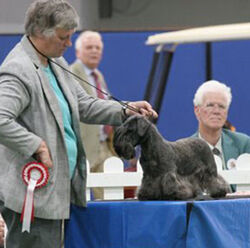 GLORIA KVITKO Gloria won BIS at the Czech Club show before coming to live in England. The following year she was joint 'Top Dog' in the breed, havng several group placings and a Veteran Group win at Darlington. Here she is in the group ring at Driffield Championship show. 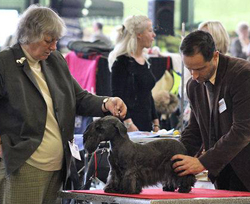 In addition to all her titles, she made history for the breed by being the first Cesky Terrier to qualify for the Champion Stakes finals, and not only gained her Czech title, but also the 'Club Winner' title and twice won the Horak Memorial Trophy. Here she is being judged at the Eurodog Show at Kortrijk in Belgium. 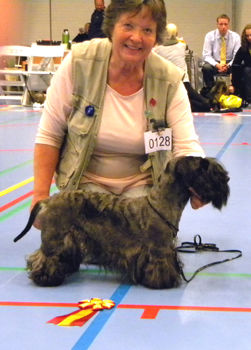 ERIK was a champion of both Denmark and Luxembourg. He was also a Danish Club Champion - an award that can only be won by dogs that are already national champions. Here he is with Kirsten, winning his crowning club certificate. 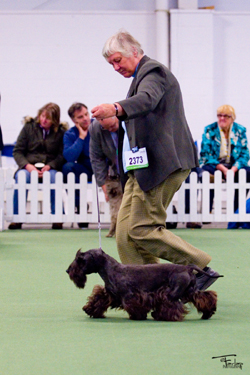 Here is TOMÁŠ striding out in the Terrier Group at South Wales Championship show, where he was Best of Breed. He had several other good wins, including BOB at National Terrier - the oldest and greatest terrier show in the world - and Best Junior at the French Championnat. 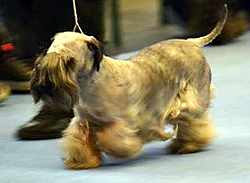 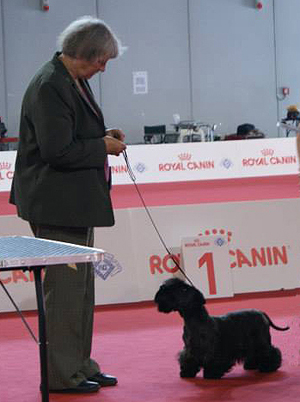 XAVER too has a good show record. He went to Milan with Anika, and came home with the Junior World Winner and Italian Junior Champion titles.

XANTHE has never been a show dog, but at Crufts 2017 TEAM RIDLEY was one dog short in the Breeders' Competition. Two months earlier, she had been a working terrier with no ambitions for stardom, and her coat cut short. Suddenly she found herself in a show lead, strutting her stuff like an old hand. Here she is, leading Pamatka and Tomáš into the Crufts BIS ring. 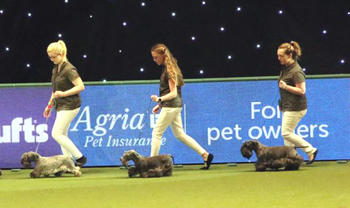 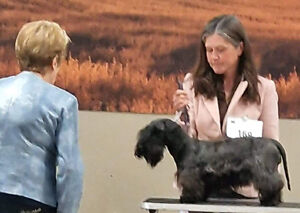 Young GLORIA has a lot to live up to, but she has made an excellent start in the showring. Here she is in the group ring at Three Counties, having just won Best Puppy in breed.

"Eight months, dark grey, confident, good size and shape which was kept on the move, feminine head of good length and bite, dark eyes giving a keen expression, medium sized ears, good puppy coat, strong legs, good angles fore and aft, nicely muscled whilst retaining some femininity. Carried her tail outwards. In the class she was more interested in the smells on the floor, but in the challenge her head was raised confidently. Happy to award her RBB and BP. Continued to show well in the puppy group.
Sharon Samson (judge)
Next
Previous